Please enter the name and email details so that we can send your friend a link to the online tribute. No names or addresses will be collected by using this service.

Your email has been sent.

To share your memory on the wall of Max Armstrong, sign in using one of the following options:

Your condolence has been submitted for approval. There may be a delay before posting.

Learn the benefits of ordering with us

Your email has been sent.

There may be a delay while processing. Please do not click the back button or refresh while a payment is processing.

Your donation has been processed successfully

Provide comfort for the family of Max Armstrong with a meaningful gesture of sympathy.

Learn the benefits of ordering with us

Max earned a Master’s degree at WSU and taught Administration of Justice there for over 6 years. He was a Black Belt in Judo and taught self-defense for many years. Max took up running at the age of 65 and ran numerous marathons including, Pikes Peak, Boston, and at age 80 in The Marine Corps Marathon in Washington DC. Max’s true passion was Magic. Performing all over the world, including summers at Santa’s Workshop, North Pole Co. for 49 years.

He was preceded in death by his stepson Eric Clevenger.

Receive notifications about information and event scheduling for Max Armstrong

By subscribing to updates, you will receive any notifications sent about changes to service schedules or other important information

Please add your text number or email address before submitting.

You have successfully been subscribed to notifications!

You will receive any future notification messages.

Provide comfort for the family with a meaningful gesture of sympathy.

Show you care by sending Flowers

We encourage you to share your most beloved memories of Max Armstrong here, so that the family and other loved ones can always see it. You can upload cherished photographs, or share your favorite stories, and can even comment on those shared by others.

Posted Dec 27, 2018 at 03:32pm
I remember Max well as a kid watching him present magic shows. I took on magic myself partially because of his influence. I took up running in my late 30s though my early 50s and was always amazed at what Max could do as a running in his older age -another great magic feat! He touched many lives and will be remember fondly by many!
Dave Cunningham
Comment Share
Share via:
CL

Posted Dec 21, 2018 at 06:27pm
Max was my friend. I had known Max for almost 15 years. Being a retired military officer, runner, and professional magician myself, we had a lot in common. Every summer, we got together for dinner and discuss our common interests. On a few occasions, he had me stand in to do his magic show at Santa's Workshop while he ran a race. He was an amazing man, running marathons at 80! I’m sure he is already doing magic for others in heaven. It was an honor to be his friend. Frank Klein, magician and good friend in Colorado Springs, CO
Comment Share
Share via:
CL

Posted Dec 21, 2018 at 06:14pm
During over 30 years performing magic with Max, I have gone from timid assistant to partner in magic, hopping in and out of dozens of illusions. He got me into running and to the top of Pikes Peak (the hard way) numerous times. He has touched thousands of lives: in the Marine Corps, the Wichita Police Department, Judo, the Aloha Restaurant, hundreds of running races and MAGIC from intimate close-up to full evening illusion stage shows! Max did more in his lifetime than any 6 people I know.
I will miss the Magic that was Max. Connie Little
Comment Share
Share via:
HS

Thank you for your service to this nation. 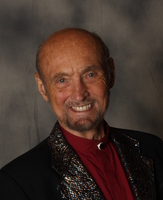 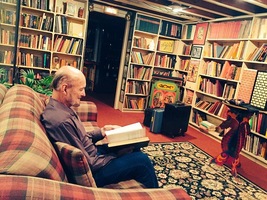 Max in his Magic library and practice space. ❤️
2
4
Add Photos
Upload up to 10 images at a time, max 8MB each

Connect with families at their time of loss.

By subscribing to email updates, you will receive two daily updates containing all new stories, photos, condolences, and more. You will also receive a one-time email, one week prior to the anniversary of death. The email will only serve as a reminder should you choose to connect with the family at what will no doubt be a difficult time.

Please select your relationship to the deceased and add your email address before submitting.

The following fields are required.

You have successfully been subscribed to email updates.

You should begin receiving updates within 12 hours. There will be instructions in the e-mail should you wish to unsubscribe, change your e-mail address, or otherwise configure your experience.